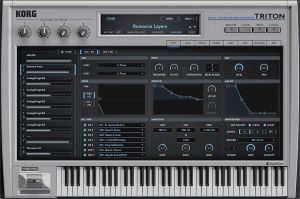 Korg has announced the release of Triton as the newest addition to the Korg Collection. Originally released in 1999, the Triton achieved popularity across many genres and continues to be used 20 years later. The new Korg Collection Triton comes with the complete EXB-PCM soundboard series, giving you access to a huge array of sounds so you can achieve Triton's full potential.

A full revival of the most powerful Triton
Hundreds of thousands of Korg Triton music workstations were sold to quickly become beloved by many of the world's most prominent musicians. Each and every one of the sounds of the original Triton is included, all of which are fully reproduced in software. This includes sounds that were widely used in the 90s and 2000s dance music, hip hop, and R&B. Every synthesizer patch is useful, with no filler sounds, giving you the ready-to-use sounds you expect of a real workstation.

Over 4000 sounds to choose from
Korg Collection - Triton comes complete with the entire EXB-PCM series, which were sold as optional extras. The newly designed sound browser lets you search the vast collection of sounds by instrument type and character, with a favorites function to help you remember the best sounds you find while playing.

KORG CollectionBundle
by Korg     $399
Add A Review My KVR