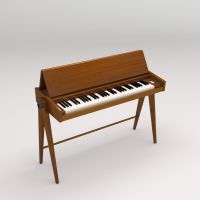 Modartt has released Hohner Pianet N for Pianoteq. This physically modelled instrument joins the Pianet T, Electra-piano and Clavinet D6 as part of the Hohner Collection, authorized by Hohner.

History of the Pianet N
The electro-mechanical piano Pianet N appeared in 1965 and quickly gained popularity among many pop and rock groups at the time. Its distinctive voice had the presence to cut through in a mix and on stage, and its size and weight appealed to touring musicians. It was often equipped with an optional underbelly 12 watt valve amplifier.

Sound characteristics
The sound of the Pianet N is complex and warm, with bass notes that growl and purr coupled with a bright percussive treble. The instrument was used in many recordings, e.g. "I Am the Walrus" by The Beatles.

Extended by Pianoteq
This virtual copy for Pianoteq benefits from its physical modelling engine — the octave range is extended to seven octaves, and a sustain pedal is added. Moreover, physical properties of the instruments can be modified.

New feature introduced
Besides the Pianet N, the latest version 5.4 of Pianoteq introduces a neat "Fuzz" effect for achieving sharp/squeaky distortion, simulating the sound of a damaged guitar amplifier.

Download & Try
The Hohner Pianet N is part of the Hohner Collection instrument pack, sold for 49€/$59, requiring the latest update 5.4 of Pianoteq. The instrument is available for evaluation in the free trial version of Pianoteq which can be downloaded from www.pianoteq.com where you can also listen to beautiful audio samples.