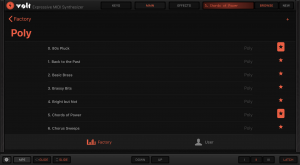 Numerical Audio has updated Volt to v1.1 including a host of improvements and bug-fixes.

Amongst other things, the update includes a much improved onscreen keyboard which now includes the option to set the number of octaves, quantized glide as well as polyphonic vertical slide, MPE sensitivity settings and more.

Managing favourites is now possible as well and just like user presets, favourites are shared between the standalone and audio unit versions.

Volt v1.1 is available as a free update from Apple App Store.