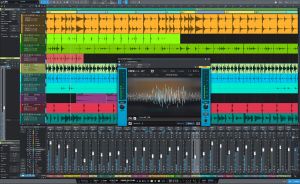 Studio One Professional's Pipeline XT plug-in allows a user insert hardware processors into their session with automatic latency compensation, enabling them to mix and match their favorite plug-ins with hardware processors. With version 4.1, Pipeline XT has received a complete user interface makeover and has added several new features and improvements. For example, latency can now be measured and compensated automatically with a single click. The maximum delay has been increased from 5,000 samples to 32,000 samples. The stereo Pipeline XT plug-in now supports mono sends without losing a second hardware output. A user can take a snapshot of their external effects processor and drag it into the Pipeline XT center display to capture hardware settings for later manual recall. A new note pad allows a user to add text notes to presets to document specific setup instructions and parameter settings for a hardware processor. Everything can be saved into presets.

Tempo track editing is faster. Now a user can edit tempo with Studio One's automation tools for ramps, curves, and smoother adjustments. Switch between the default time-linear timebase and a new beat-linear timebase, so that the grid no longer jumps under the mouse pointer. Narrow the Tempo Track display range to a musically meaningful range for improved tempo editing and visibility.

Studio One 4 supports AAF (Advanced Authoring Format). With version 4.1's new AAF export options, compatibility with other DAWs has been vastly improved. A user can now embed WAV or AIFF audio files, instead of referencing them; split stereo tracks (important for exporting to Pro Tools); and create copies of audio files in WAV or AIFF format, with a choice of resolution and sample rate. Trim file sizes by eliminating unused regions; export pan automation—or don't, if exporting to an application that doesn't recognize it; and use the new Legacy mode to export to an application that only imports AAF 1.0. 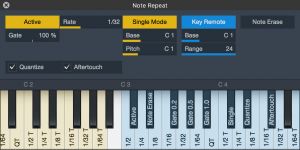 Fully remote-controllable from any MIDI controller, Note Repeat has been vastly improved. Note Repeat now has its own section in the Record Panel where a user can activate/deactivate Note Repeat, select a repeat rate, and activate/deactivate Note Erase. Set the gate time for notes and use key or poly pressure to control note velocity. Quantize notes to the song grid (similar to Quantize in Impact XT); when Quantize is inactive, notes are triggered instantly from a key or pad. Use Key Remote mode to control all Note Repeat functions from a keyboard controller. These are just a few of the new Note Repeat features.

Studio One 4.1 also adds a new System DPI Scaling option for third-party plug-ins on Windows 10 so that they appear at the normal size expected by the user on high-DPI 4K and 5K screens, and it delivers other improvements.