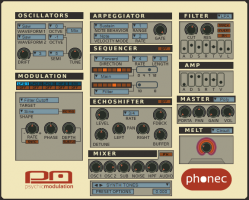 Psychic Modulation has launched a crowdfunding campaign for the development of Phonec v2.0 as a Mac OS X and Windows 64-bit VST and AU plugin.

Phonec was originally developed with SynthEdit in 2012. The idea was to create a synth that could reproduce the sound of 'video logos' heard on worn out VHS tapes in the 80s. It has since inspired a cult following. I began receiving numerous requests for a Mac version and have finally decided that it's time to make this happen. The funding will go towards hiring a skilled programmer to develop Phonec v2 for Mac and Windows 64-bit. Phonec v2.0 will have lots of interesting new features, but best of all, it will finally be available for Mac users.

However, this can only happen with your help.

I have set up several different funding options with 'goods' awarded ranging from discounted upgrades, Pre-order options, great deals on Psychic Modulation's entire range of commercial plugins and access to a new, ever expanding collection of Ableton Instruments and Sound Packs. You can check out the first instrument release and download a free demo here. I have even included a funding option for custom web design. More details about the campaign and the funding options can be found on the campaign page right here.

Phonec v2.0 will be a major upgrade from the original in many aspects including sound, features and bug fixes. While staying true to the original's layout and design, there are lots of new things going on under the hood.

To read more about Phonec in its current state, listen to more sound demos and even take it for a test drive, visit the Phonec web page here.