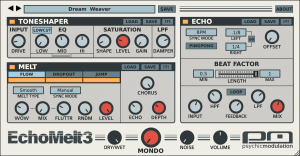 Psychic Modulation has updated EchoMelt3 to v3.1, featuring many changes.

Preset Navigation
Previous/Next arrow buttons have been added for easily navigating presets. The buttons will cycle through any folder or sub folders within the main Presets folder. Extra presets have also been included with this update.

Bug Fixes
This update fixes a few issues that were occurring on some systems in specific hosts, and provides optimizations and improvements overall.

Here's what's new in this version: