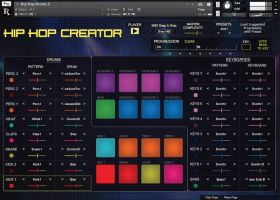 Realitone has announced the release of Hip Hop Creator.

Hip Hop Creator is the most comprehensive hip hop instrument ever created. Packed with authentic hip hop sounds, both modern and old school, along with a pattern player so easy that even your grandpa might decide that maybe he should be a hip hop producer.