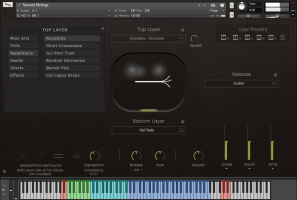 Realitone has released Sunset Strings, a Kontakt Player library of a chamber ensemble recorded at Studio A at United Recording - formerly Ocean Way - in Hollywood.

Starting with a large selection of articulations, from basic to extended, Sunset Strings has a unique Bottom Layer and Top Layer system where you can blend from one articulation to another using the mod wheel. These transitions are seamless, even if the transition is slow.

There are also attack and release articulations that combine with those two layers. Slow bends, grace notes, scatter, converge, crescendos and decrescendos, sforzandos. Combined with the main articulations (two layers or one) this gives the ability to create near infinite combinations, from pretty to twisted.

Keyswitches and user presets allow all this to be controlled on the fly.

The walkthrough video below is the best way to understand how this all works.

Sunset Strings works in the free Kontakt Player, or in the full version of Kontakt (version 5.8.1 or higher).