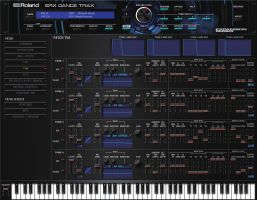 In the early 2000s, Roland's SRX series of expansion boards were an innovative way of adding fresh flavors to your synth. Installed directly into Roland hardware, each board created a tiny genre-centric world of its own. From classic piano spreads (celebrated in Roland Cloud with SRX Keyboards) to strings and woodwinds, the SRX series expanded players' pallets and opened new creative doors.

"Supreme Dance," the fifth entry in the SRX-series was a collaboration between Roland and Spectrasonics. Catered to dance, hip-hop, and electronica, the original hardware version sampled waveforms of vintage and contemporary synths including Junos, the JP-8000, and many others, resulting in a robust collection of sounds: from lush synths to brazen drum sounds.

Roland Cloud now includes SRX Dance Trax, created in the spirit of Roland's seminal hardware board with reimagined versatility. SRX Dance Trax provides a huge variety of sounds geared towards getting you on the dance floor. Roland Cloud's SRX Dance Trax collection comes equipped with 312 patches, 24 rhythm sets, and 818 waveforms, all with the inimitable quality of the original board. Included are rattling synth bass, crisp leads, and 82 hits and stabs to populate your bangers with unparalleled creativity. The heart of any dance song is its backbeat. SRX Dance Trax offers a large collection of individual drums.