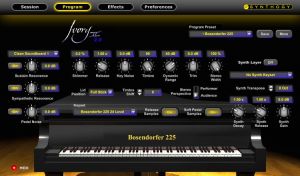 Synthogy has announced the release of Ivory II Studio Grands, a new virtual instrument featuring two classic grand pianos ideally suited for studio recording. Synthogy say the 7' scale of these instruments produces the ideal balance of power and tone, and a remarkable treble range so often featured in modern recording.

Ivory II Studio Grands is a free-standing virtual instrument. No previous version of Ivory is required. Of course existing Ivory II owners will find that it installs quite readily into their existing libraries.

The v2.5 update is free for all existing registered Ivory II customers and is now automatically included across all Ivory pianos.