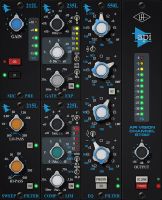 For over 40 years, API mixing consoles have become synonymous for audio excellence and multi-platinum recordings. From the Foo Fighters to Fleetwood Mac's classic Rumours, API mixing desks are legendary for their colorful punch and warm analog detail.

In addition to the API Vision Channel Strip there are a number of improvements in the 7.3 update including: