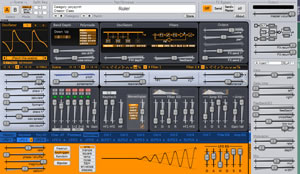 Vember Audio has announced that the software synthesizer Surge is now released as open-source (GPL license) on GitHub.

Surge was previously sold as a commercial product by Vember Audio.

"As I'm too busy with other projects and no longer want to put the effort into maintaining it myself across multiple platforms I have decided to give it new life as an open-source project."

"It was originally released in 2005, and was one of my first bigger projects. The code could be cleaner, and at parts better explained but its reliable and sounds great. And beware, there might still be a few comments in Swedish."

The codebase was migrated from before an unfinished 1.6 release which improves on the last released 1.5.3 in a number of ways:

It currently only builds on Windows, but getting it to build on macOS again & Linux should be doable with moderate effort.

This is cool. Thank you, Vember Audio! What are you working on now?

OK, I'm gonna get the negative out of the way:

The GUI would be great if it was bigger, or scaleable.

This synth is fantastic. Really enjoying this. Also, some cool presets that get my imagination flowing and help to teach you how to use the synth.

In my opinion the effects are slightly better than many paid plugins. I was gonna get HIVE, but I think I'll stick with this for a while (and no disrespect meant at all to U-he, their plugins are great).

Fantastic job, and thanks.

hi, have you checked the newest (March 2019) builds which include Zoom? they are at http://surge-synthesizer.github.io.

I am trying to find the downloadlink for surge, but unsuccesful. Can anybody help me? Mac OS X Version.

sure, just hit up http://surge-synthesizer.github.io for the newest 64-bit macOS installers.