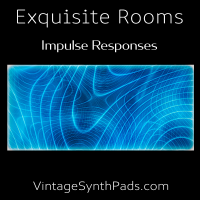 Vintage Synth Pads has announced the release of Exquisite Rooms, a collection of Impulse Responses that includes warm and woody rooms, drum and vocal booths, guitar rooms and closets, etc.

Exquisite Rooms is a large collection of over 100 Impulse Responses designed to add the character of natural acoustics to your recordings. VSP also added some chambers, live rooms, churches and some larger spaces for variety.

All Impulse Responses are in the commonly used WAV format which makes it compatible with many of the main tools like Altiverb, Reverberate 2/3, Hofa IQ, and the large list of Impulse Responses plugins that support WAV files.

Some of the included categories: