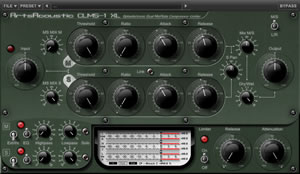 CL Series by ArtsAcoustic is a Virtual Effect Audio Plugin for macOS and Windows. It functions as a VST Plugin and an Audio Units Plugin.
Product
Version
1.0.19
Product
Version
1.0.19
Tags
TagsDynamics (Compressor / Limiter)ArtsAcousticCL Series
Effect
Formats
Copy Protection
Serial Number
My KVR - Groups, Versions, & More
20 KVR members have added CL Series to 6 My KVR groups 27 times.
Not In Your MY KVR Groups
(or group limitation prevents versioning)
11 0 Favorites
11 0 I Own This
2 0 My Actual Studio
+3 in private groups

The ArtsAcoustic CL Series is a bundle of three analog-modelled photoelectronic dynamic processors, namely CL-1, CLMS-1 and CLMS-1 XL. They're based on various analog optoelectronic diode tube compressor schemata used during the late '70s up to the mid '80s.

ArtsAcoustic's goal was a dynamics processor suite that gives the perception of true analog sound. To help achieve that goal, over the last 1 1/2 years ArtsAcoustic dissected every rare analog high end compressor/limiter they could get their hands on (1176 silverplate, dbx 160, valleypeople dynamite, to name a few). Developing the compressors, ArtsAcoustic didn't stop at just emulating the circuit structure, but they modelled the crucial parts of the units (transistors, resistors, capacitors, etc.) themselves, where they felt it was necessary, as only then the desired effects take place. The result is an algorithm that provides the same sound of an analog circuit, along with all beautiful side effects we love from those old, colorful machines, according to ArtsAcoustic.

I was a little surprised to see that nobody had reviewed this plugin so I decided to do it by myself. I am not so good making reviews because I have small concentration problems and also because english is not my native language. But here we go anyways.

I have been trying to avoid having too many compressors my toolbox so I can prevent myself turning into a collector. I prefer to own a few specialized tools that I know well instead of having 25 different ones that have obviously will have a lot of overlap. That kind of behavior is just a waste of money for me. I am not looking for jack of all trades when it comes to compressors anymore, but unique tools that do their own thing and do it good. Even though there are many interesting compressors out there, and I also happen to like everything new and shiny, I still try to justify every compressor I buy. While CL-1 is not the most affordable compressor in the market in my opinion it was still easy for me to decide whether I should buy it or not. I try my best to explain my reasoning below.

First of all, I don't think there is a compressor that can do everything, and this is why people always seem to be using multiple compressors. I tried to put all of my compression needs into a different categories so I can avoid spending my money on compressors I don't really need. So here are my categories based on my own needs:

I like this kind of compressor to be very transparent from it's nature. It needs to be able to massage all elements in a song together and make things sound more finished. 2bus compressor of my choice compression definitely needs a HPF filter because I am mostly addicted into electronic dance music. Anything that changes the tonal balance or adds even low amounts of distortion is not good in my opinion. So I am not looking for colorful compressors on my 2bus. I prefer to do those things with separate tools. My2bus compressor must have a good metering and the capability to do mid/side processing. I expect the masterbus compressor to be something that can add a bit of that golden dust into my songs.

I am using two limiters. One that is very transparent ends up being used in the master channel only because it adds too much latency for being used in anything else. I am also using this limiter to add dithering. It's nice to have a dithering built into the limiter so I don't need a separate product for that. Another limiter is being used on instrument tracks if needed because it has lower latency and lower CPU usage compared to my main limiter. Important requirement are also the ease of use and good metering.

Something that is easy to use and don't have too many parameters to slow me down. It needs to be punchy and to be able add a touch of harmonic distortion to my drums without messing with the tonal balance too much. I don't like anything that kills the transients and makes everything sound flat. There is nothing worse than to have EDM track that has drumsounds that don't cut trough the mix.

Basic digital compressor with versatile controls to make it work for most instruments. Main requirements are low CPU usage, transparent sound and good range for all the parameters so it can be made work for as many cases as possible.

I like my kick->bass sidechain compression to be very obvious so I usually set it so it can be easily heard. This kind of compressor needs to be able to pump like there is no tomorrow. The ability to emphasize the the attack proportion of a bass or lead sound is must. Very musical attack and release curves and the input drive capable of annihilating your neighbors or enemies is also a basic requirement. I expect my FX compressor to transform small chihuahuas into vicious bull terriers that will bite your leg off if your not careful so to speak.

So what category is CL-1? While it can do limiting and M/S processing I would most certainly say that it belongs into the category that gives me the most pleasure which is FX compression. I am so excited about CL-1 that I hardly know what to tell about it. CL-1 is in my opinion the best plugin compressor of it's kind. Many compressors sound almost identical to each other and they have nothing really interesting going on because of that. To put it short they have nothing that truly separates separates them from the competition. Just generic, boring and transparent "digital" compression that works for everyday use.

CL-1 by ArtsAcoustic is something else, it does not sound like a typical plugin compressor at all. It's a cliche but It really sounds like hardware. I get good vibes every time I use it. It just feels so good. I have to say that for my taste CL-1 does not work so well on masterbus or any group channels because it adds some much colour. With the colour I mean the whole package of distortion, dynamics and tone.

CL-1 can separate weak "forgive me that I exist" synth sounds from the crowd and transform them into something that will rip their way trough the mix I could replace most of my compressors with something else but not this one.

I have had hard time figuring out why nobody talks about CL-1. Maybe because it's not made by one of the "cool" companies and it's not an emulation of a know classic piece of gear either.

All I can say is that while CL-1 is not something I reach first when I need to get the dynamics under control, it's the first thing in my mind every time time when I need to have a synthbass or lead in your face.

Something has to be said about the distortionof this plugin. I am generally very picky when it comes to digital distortion algorithms. My experience is that so many of them don't sound musicall at all, and they can also easily ruin the mix. Digital distortion effects usually have small sweet spot compared to good analog distortion, which on the other hand can sound so much smoother even when it's used "out of range". Something in this plugin just whispers into my ear : "turn it into max". I rarely get that feeling with plugins. This plugin just invites me to abuse it. In my opinion the input drive of CL-1 is a achievement in itself that is worth of applauding. I sometimes use this plugin only for the overdrive characteristics. The input drive is so tasty and inspiring. Like some good analog gear, CL-1 can take the abuse. I usually try to avoid using extreme settings in plugins. But CL-1 has such a huge sweet spot that it almost invites me to use it to shape shape the sound into something totally new.

CL-1 changes the tonal balance quite a bit which is not what I am looking if I am compressing a group channel. But I have to say that the way this plugin pushes lowmid's/mid's for single instruments is nothing short of amazing.

My conclusion is that even though this plugin costs more than many other compressors it's really worth money. CL-1 has amazing sound and just the right set of features. I normally go for the cheapest plugins but It's because of the sound why I don't think this is expensive at all. It's actually quite a bargain considering how good it sounds. I don't remember experiencing even a single crash with this plugin so it's also quite stable. At least on my system that is.

I would like to congratulate ArtsAcoustics for their hard work. I am a big fan of you guys and I can hardly wait to see what's coming up next.

I confess that I am a bit of a collector when it comes to plugin compressors. And if there's one of those I had to keep, it would be this collection. I bought on release and I still think it's sensational. Way more versatile than say the 1176/dbx/la2a, etc clones.

I use it everyday. And btw, I do sometimes like it on the master buss. Not every time, but in the right production it's killer :)

I am really interested on how you use CL1 on the masterbus. What kind of program material does it works the best in your opinion?

Btw I love your song "Reinjection". Amazing groove and excellent production too.

I can't remember off the top of my head mate. I'd imagine it was an upbeat breakbeat-style production, where the CL1 could react much faster to the fast grooves than your typical SSL, or other buss comp. You're right though, it does have a certain character and it all depends whether you want to be that drastic on the master buss, and whether it sounds good on the production.

Thanks for the comment on Reinjection. I rushed that a little, so I appreciate the positive feedback :)