jsCompShaper by jsAudio is a Virtual Effect Audio Plugin. It functions as a VST Plugin. 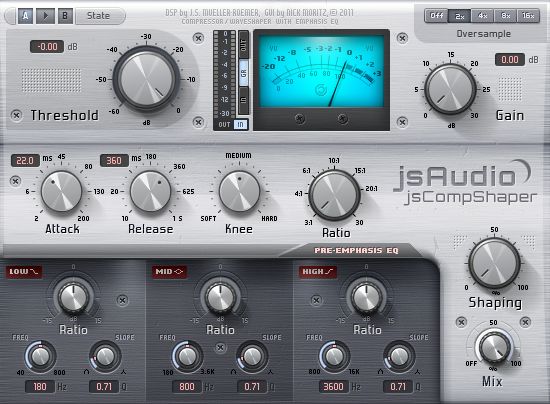 jsCompShaper is a flexible soft-knee compressor/waveshaper which can seamlessly morph between these two operating modes. It provides pre-/post-emphasis filtering (similar to a side-chain filter) for frequency-dependent compression and waveshaping, as well as an analog-like attack/release curve. Furthermore, it supports parallel compression and oversampling.

This is a shining star in a sea of mediocrity. I will surely be contributing to your cause in the future.

This is all kinds of good.

Lacks a manual but really even with no brain whatsoever it would be hard not to improve your sound.

Well, I don't speak or write english very well, but I though I should express my oppinion about this pice of software. First time when I saw it, knowing that's free, I didn't though it's good, but the interface looks awesome and I said: Let's give it a try!

Well, I try it on a song that I'm working on (progressive house) and put it on the drums with no other effects. I turned a few knobs here and there and I was looking like this: o_O

The sound was amazing! Didn't expected that! Maybe you won't belive me, if that's the case try it yourself! The shaping knob is doing some great stuff, adds some greed to the sound, can't explain it, also having a mix knob is more than awesome to bring some of the dry signal back.

PS: You can find the x86 version on the developer site.

Lot's of free compressors these days. Every single one of them has it's own trick. Point is, that in most cases, those payware ones will be always a bit better, more analog. Big companies have resources for real hw units, possibility to meature them. Not much of freeware developers can do that, so they read about behaviour and then mimic it in some way that kinda works, but it's not that precise most of the time.

Is there way out of it? Yes. F*ck them all, make it simple, but solid! Exactly what jsCompShaper does. It features internal sidechain EQ, paralel functionality, ability to continuously switch between compression and waveshaping and last but not least, crazy oversampling.

All you need really is throw it on drum buss and play with settings to hear the sound. In some settings I swear it reminds me of SSL sound. (Didn't even touch real console, so can't tell "for real", but from internetzz.) It doesn't have HP filter though, so it's better for drums where you don't want kick completely low-endish.

That shaping is interesting. Some cool character can be achieved, but especially on the drum buss it does just a little changes, even smaller when used in paralel.

Another thing is versatility. I didn't work with voices that much lately, but i believe it's great on vocals. That EQ and some special voclal presets suggest it. Or knee for example. On some compressors you turn that knob and almost nothing happens soundwise. Not here at all. Hard or soft as you like.

What I love the most is the oversampling. I believe it's one of the things that define sound of those big payware plugins. It makes it haeavy on CPU in jsCompShaper, but result just sounds good. Defined. Smooth. I guess not much far from simplier Waves plugs.

Conclusion: I guess old HW companies have spent ages and milions to make their compressors behave as ideal as possible. SW companies just as much to make it behave as not-ideal as possible to get close to products what HW companies made. As a result there is so much of different coloration in the world that no ordinary listener can really tell. That means on budget, only thing we should be really concerned about is, whether it sounds good or not in general. ...and this compressor definitely does. It won't sound exactly as any HW particularly, but really good anyway! :) I don't mean that emulations are meaningless. I just mean (and hope) nothing to worry about using plug like this. :)

What I love about free plugins is that there is not much of decription needed now, just go and try it for yourself. :) For me, this is discovery of the year so far. Love it!

Yessir, FarleyCZ! I totally agree with your review. It is ABSOLUTELY my 'favorite "find" for the year too! This is very, very good quality freeware. I really thank God for it.

+1 this is one of the free secret jem. Deserves more attention imo.

Does JS Compshaper x64 download plugin work in Windows XP even though Windows XP is 32 bit?? I want to use it in Presonus Studio One 2 but I have Windows XP as my operating system...?? Thanks

Average user rating of 5.00 from 5 reviews