BUYING! X Checkout $39.00Buy Now!
NYCompressor by DDMF is a Virtual Effect Audio Plugin and a Mobile Audio App. It functions as a VST Plugin, an Audio Units Plugin and an RTAS Plugin. 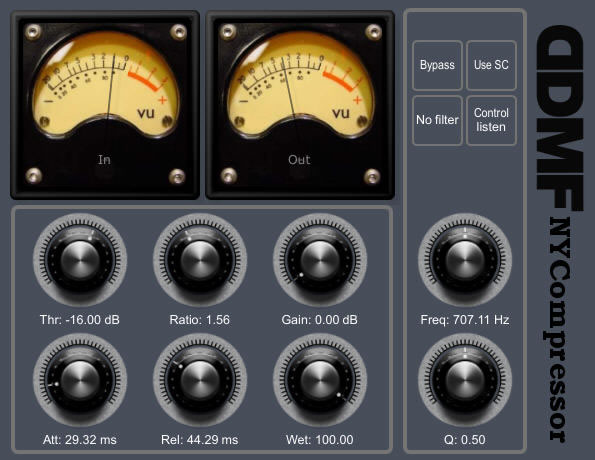 NYCompressor is a lightweight all-round compressor with a ratio of up to 1:10, up to four inputs to support true sidechaining and optional low-, band- or high-pass filters in the signal detection path. Arbitrary amounts of the original signal can be mixed to the output ("New York compression style"). Soft-knee option included.

NYCompressor by DDMF is a GREAT sounding compressor plug in at a great price, lets review it .

- It won't squash all your low end unlike many other compressor plug ins.

- Works great on individual tracks and busses, even full masters.

- Very flexible side-chain filters add more functionality, you can really dial in the perfect compression sound with this function, extremely cool if you ask me.

- Won't eat all your CPU power.

The not so good stuff:

- GUI looks hmm ... ugly ? dunno, I know it's about the sound but a better looking GUI can't hurt, just my opinion.

- An even lower thereshold : some compressors have a -50 db thereshold or -60 db and even -70 db, NYComp goes to -40 db, why go so low you ask ? when using the side chain hi pass filter is its very useful to be able to go that low, if you want to compress cymbal or hi hat bleed it is very handy to have that feature.

- A sidechain gain control for both the filter and external sidechain.

- The ability to run the external sidechain thru the filters, that would be great.

- When working in stereo or M/S it would be of great help to be able to mute/solo the Mid and Side channels to be able to tweak them to perfection and listen to either channel separately.

To me this is a great bang for the buck plug in, I have many different compressor plug ins, some belong to the more expensive categories and the NYComp sounds as good as anything out there, it is super flexible and sounds great, hard to go wrong with this one at this price point, I recommend it .

I love checking out plugins. Especially Compressors. The attack and release characteristics of compressors vary a lot from comp to comp, so it's good to know how a wide variety of compressors sound in a variety of situations. I run Snow Leopard, so this review is for the mac AU format.

I stumbled across DDMF and saw that they were 'pay what you want' for the license. Right away this sends alarm bells in you head saying 'it's probably not that good.' Nonetheless, I decided to check it out!

Good thing I did! NYCompressor is great! It yields the best results with the ratio somewhere between 1.10:1 and 2:1, but I've used it on guitars, drums and bass with higher ratios and got nice results as well. I really like how fine you can tune the knobs. At lower settings you can adjust it by 0.01 increments. Very nice!

It's not transparent, but it's got nice character. I wouldn't say it's dirty, but it almost is. That's the best way I can say it. This makes it enjoyable to use on drums or guitar. (I have yet to keep it on a vocal track, though)

The name lets you know right off the bat that it's able to do parallel compression (aka New York Compression). This is really useful to have built into a compressor, and I notice more and more plugins featuring it. Great!

The side chaining is handy and gives you a variety of options for filtering.

On instruments I couldn't be happier. Using it as a bus compressor is pretty good too. The default ratio is 1.56:1, which is a great starting point for this application. I find this compressor works the best with between 1 and 3 db of gain reduction as a bus compressor. After that, you can really tell that it's on the track. But then again, bus compressors should only really be used as lightly as possible anyway.

The availability of very fast attack time is nice if you want to do some compressor style limiting. Again, in this field, it was very good, but not great.

One thing that is unique to this compressor, as far as I can tell, is its attack curve. It's very laid back. Most compressors jump down really fast, then gently bring the gain down for 2nd half of the specified attack time. NYComp gently brings the gain down evenly, so transients come through very nicely, and don't feel jumpy.

There are a couple of downsides however.

First, the meters often freeze, which is frustrating at times.

Second, there is no indication on the website (and no reply by email) about what is technically happening inside the plugin. For instance, oversampling is especially important in preventing aliasing distortion in compressor plugins. There is no option for this, and I don't know if it happens automatically. Also, we have no idea what the internal resolution of the plugin is. These are things that would probably prevent someone from wanting to use this plugin in a very important project.

Third, you can't click the GUI to bring it's window to the front. Weird. Probably not that big of a deal, but when you're working hard, it kind of interrupts the workflow.

Fourth, no lookahead feature. This could be implemented with the sidechain, but I find that to be a headache at best. If I want lookahead, I usually use another compressor with the feature already built in.

Other than that, I would like to say that I use NYCompressor often. I have a UAD card, and I use the compressors on that a lot, but still go to NYCompressor a lot. That should speak for itself.

Bottom Line: Great as a track compressor, would be within the first 3 I try as a submix/bus compressor. Parallel compression is easy to do. Fast attack times are handy. Not the best, but pretty darn good. Slightly unsettling lack of statement on internal resolution.

The Real Bottom Line: Almost for sure better than your DAW's stock compressor. At least it's different. At $20, you can't go wrong.

EDIT: NYCompressor is now $20. Unbelievable deal! Don't be a snob and not buy it just because it's cheap.

EDIT: I have analyzed NYComp using a FFT spectum analyzer, using typical sine wave manipulation techniques. There doesn't appear to be any harmonic distortion due to low processing resolution. Also, the character seems to come from diminishing even order harmonic generation during heavy compression. Since this only happens to a very slight degree (~ -60db of 2nd harmonic in 4 db of compression) it does create a nice, musical thickening of the sound. Comparing this to much more expensive plugins, I have determined little difference in terms of aliasing distortion or excessive harmonic generation during heavy compression.

If you would like to see what a terrible compressor looks like, try putting a sine wave through the AUDynamicsProcessor to about 4 db compression with an FFT...you'll see what I mean. ;) Do the same with any 'expensive' plugin. Then Try NYCRead more

This Padshop 2by Sampleconstruct @ 20:14 in Instruments

How to Record a Song From Beginning to End! (Series preview)by The Noodlist @ 20:08 in Getting Started (AKA What is the best...?)

What are you listening to now? Look on my works, ye Mighty, and despair!by thecontrolcentre @ 19:51 in Everything Else (Music related)

Which two artists/bands would you like to see work together?by mumpcake @ 19:35 in Everything Else (Music related)View All Latest Posts