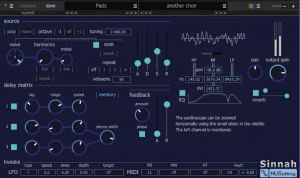 Sinnah by NUSofting is a Virtual Instrument Audio Plugin for macOS and Windows. It functions as a VST Plugin and an Audio Units Plugin.
Product
Version
1.1
Product
Version
1.1
Tags
Tags:SynthNUSoftingSinnahSynth (Analogue / Subtractive)Synth (Hybrid)
Instrument
Formats
Copy Protection
None
Important Note
The Sinnah Mac installer may fail in Catalina, please contact us if that happens. https://nusofting.com/support/
My KVR - Groups, Versions, & More
69 KVR members have added Sinnah to 12 My KVR groups 81 times.
Not In Your MY KVR Groups
(or group limitation prevents versioning)
37 0 Favorites
28 0 I Own This
5 0 I Want This
3 0 My Actual Studio
+8 in private groups

Sinnah is a freeware VA synth plugin (*and a project) but instead of the standard subtractive resonant filter it uses a resonant delay network.

My favourite free (in beta/developement stages) synth in the landscape lately. And one of the best ideas in synthesis that was publically shared and wellimplemented. What I like most about Sinnah (and there are oh so few synths like this nowadays) is that, with very few controlls I can reach a very wide range of sounds! This is for me, one of the "must haves" in a good creative tool. Its sound could be defined as "organic digital", sort of physmod variant. (very very phat yet very digital). Good for everything: from wide orchestral like pads to short plinks and plonks, from fake oboes and roaring distorted leads to broken piano simulations. Clean fresh rescalable interface and sharp look. Very low CPU usage. Lots of good presets to start with. This little synth is already a beast and I'm really waiting for its offsprings and new generations of developement.

Hi. I'm new to this site and I just love it! I'm actually relatively new to the world of soft synths and just stumbled across freeware while looking for other answers to my questions. It's amazing what is offered for free! I signed up so I could take advantage of all the banks and patches here. I've gotten rather addicted to all this. This synth isn't tagged as 64-bit for Windows, but I downloaded it about a month ago in my 64-bit system (Windows 7). Just a heads up. Thanks for offering this website for music addicts like myself. I've been a guitar player for over 35 years, and this give me a whole new world to explore.