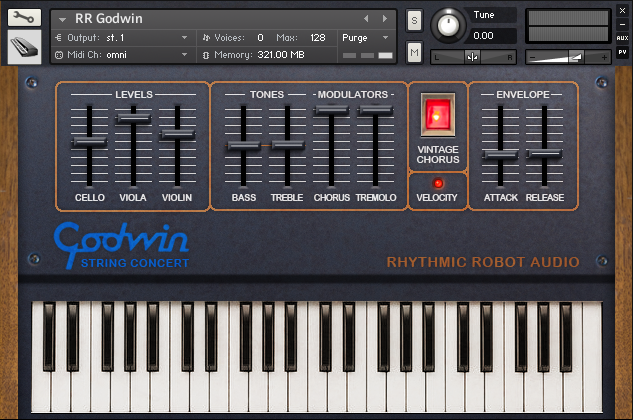 What is it?
String SynthesizerAnalogGodwinKontakt InstrumentLogan String MelodyLogan String Melody IIRhythmic RobotString EnsembleString MachineSynthSynth (Analogue / Subtractive)
Format(s)
Operating System Availability
Audio Demos
Godwin Demo 1
License & Installation Method
Voucher / Code for redemption on other website
What does this mean?
Important Note
Requires a FULL version of Native Instruments Kontakt version 4.2.3 or higher (all versions of Kontakt 5 supported). Kontakt Player is NOT recommended and will time out after 15 mins or so. PLEASE MAKE SURE YOU HAVE A FULL VERSION OF KONTAKT BEFORE BUYING, AS WE CAN'T GIVE REFUNDS FOR SOFTWARE BOUGHT IN ERROR!
For related news items, downloads and more please see the full KVR product page for
Godwin

Rhythmic Robot Godwin is a sampled recreation of the Godwin String Concert, an analogue ensemble string synth similar in function to the models offered by Logan or ARP but with a tone very much of its own. The basic synthesised waveforms of the original were processed by a complex modulation section and a thick onboard chorus effect to generate rich and evolving sounds which then passed through treble and bass filters. The control set was minimal, but the resulting chorused string sound had a peculiarly sweet tone which has led Sound on Sound magazine, for example, to rank it as sounding better than the more famous Solina.

Godwin aims to recreate the Godwin String Concert as closely as possible while adding some touches of modern functionality. It takes multiple samples of the original instrument in a variety of states – chorused, with and without tremolo, etc – and allows the user to blend them in exactly the same way as the original. The lush analogue chorus of the original is retained but can be switched in and out, while a contemporary stereo chorus can also be added in to generate a wide stereo spread to the sound (the original Godwin was mono only). Velocity sensitivity broadens the responsiveness of the original machine.

Godwin is available now from www.rhythmicrobot.com and requires the full version of Kontakt 4.2.3 or later to run.