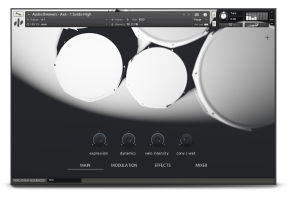 Audio Brewers has released Axé (Ash-eh), a Percussion Library with a total of 81 instruments divided in 5 categories, recorded, mixed and delivered both in Stereo and in Ambisonics.

Axé contains a total of 81 Percussion Instruments divided in 5 categories:

The Sequencers supports up to 16 tracks, has the ability to save the patterns to MIDI files and allows the user to Drag and Drop the patterns directly into the DAW.