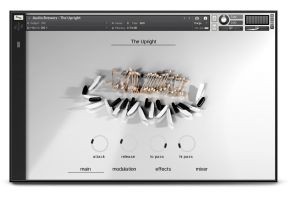 Audio Brewers has released The Upright, saying they are "the first company to create Sample Libraries and Virtual Instruments recorded, mixed, and delivered in Ambisonics".

As a first-of-a-kind product, featuring a beautiful Upright Piano from the late eighties, 'The Upright' offers composers the possibility to have control over how they want listeners to feel the message delivered through their music.

Thanks to Ambisonics recording and mixing techniques, and a decade of experience developing Sample Libraries, Audio Brewers opens a door to artists to be able to create music natively compatible with any speaker array configuration they can decode on - regardless of it being a Stereo, Surround, Atmos, Binaural or even for VR composition, 'The Upright' is natively compatible to the composer's needs in from the moment they start writing music. Additionally, because the Ambisonics signal is three-dimensional, a new panning technique prior to decoding can be used to rotate in a realistic manner (no hard-panning) the source of the sound in any of the X, Y, or Z axes.

Finally, 'The Upright' also includes a stereo-version for those who chose to use stereo-only compositions.

The Upright was sampled at 24-bit/48kHz quality with ~14-velocity sustains. Over 100GB (compressed to 49GB lossless).

Intro Price: €99. This includes Volumes II, III, IV and V for Free (when released). The price for new customers will increase with each addition.

For Ambisonics demos or any additional information, please visit www.audiobrewers.com