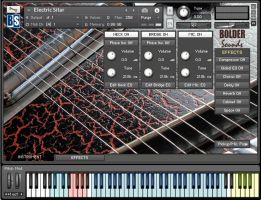 Bolder Sounds has released Electric Sitar for Kontakt. They say that this is the first detailed sample library of this instrument for Kontakt.

The Danelectro company produced an electric sitar and gave John Lennon and George Harrison the first two made. The instrument was designed by New York session musician Vinnie Bell. Their goal was to make a guitar that sounded like a sitar made famous by on Beatles recordings, but in an easily playable form. This instrument has been featured on a wide variety of music including the 60's psychedelic era, progressive rock and jazz fusion.

Three independent sample sources were recorded from the Electric Sitar - neck and bridge pickup samples as well as a microphone signal. The mic samples give this instrument a very animated high end with the result being a bit of a acoustic-electric hybrid, giving us a closer emulation of a real sitar. Extensive KSP scripting by Bo Clausen will give the user a wide ranging of tonal color.

The full uncompressed size of this library is 2.6 GB. It has been Kontakt compressed (.ncw) down to 1.45 GB for convenience of downloading and rapid loading into Kontakt.