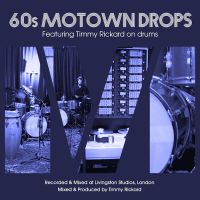 Drumdrops has released 60s Motown Drops, which features 30 drum tracks inspired by the 60s Motown Records sound, engineered, performed and produced by Timmy Rickard. This album takes its inspiration from the sound of the 1960's Detroit era of Motown Records, when the 'Funk Brothers' were the main musicians behind this pioneering sound and style.

This release is influenced by artists such as The Four Tops, The Temptations, Marvin Gaye and Gladys Knight And The Pips. Motown Drops delves deep into the catalogue of this revered record label, and includes not only the Funk Brothers signature grooves, but also a wide variety of lesser known tracks, making this release as varied as it is classic.

To recreate the 60s Motown Sound Drumdrops recorded the tracks in a large live room at Livingston 1 studio in London, the room was mic'd up as if there was a full Motown band in the room – brass section, vocal mic, talkback mic and then two mics on the kit – a kick, and a kit mic placed above the bass drum, between the rack toms and below the ride. Mix these mics with a 60s kit and the Motown sound is created. Customers that purchase the multi-tracks will have the audio from each microphone in the room so can mix the sound exactly as they want it.

For the kit Drumdrops used Timmy's 1960s Ludwig club date kit with a 20" x 14" kick drum one 12" x 8" rack tom and a 14" floor tom. Four snares were used – two Ludwig Pioneer Snares, a Ludwig Hollywood Snare and a Slingerland Shelbyville Snare. Drumdrops used two cymbals a Zildjian Trans Stamp and a Zildjian Constantinople Hammered cymbal (both doubled up as rides and crashes) and some Zildjian vintage hi-hats. Across the tracks there is tambourine, claps and congas. All the drums used Remo Ambassador heads.

Mic wise Drumdrops used Neumann Valve U47s & 67s, Coles ribbon mics, a Sony C38b and an AKG Valve C28. Mic pre's used were UA2-610s, Telefunken V76s and a Neve 1073. All of the mics were recorded without EQ or compression except the overhead microphone which used an EAR valve EQ and compressor. All of the tracks were recorded on to a 16 track Studer A80 2" tape machine and then transferred to Pro Tools for mixing and editing. Included in the stems is an EMT plate reverb stem used on some of the drum tracks.

All thirty tracks can be purchased as individual tracks as multi-tracks (unmixed), stems (mixed) or drum loops (locked fills and grooves). The Multi-tracks (which are made up of a combination of all room mic positions) come with a tempo map and OMF file to export into other DAW. Drumdrops also provide patches for Pro Tools, Logic, Cubase, Reason, Reaper, Studio One and Ableton Live and the audio as 24-bit WAVs. The Multi-tracks also come as locked to the beat song construction loops (intro, chorus, verse etc) so you can quickly get songs going in your DAW. The Stems and mix packs which have all the drum parts and percussion as separate stems come as 24-bit WAVs, they also come with a tempo map. The packs also include locked to the beat song construction loops. All of the mixes have been mixed in mono. The loop packs contain as many 2 bar locked to the beat grooves that could be taken from each track. The loops come as fills or grooves. They come formatted as 24-bit WAVs, Apple Loops and Rex 2 Files. Each track can be purchased track by track or if you buy the album (in any format) you get 50% off the the individual track price.

Head to the Drumdrops store here to preview and then purchase this album.

Check out a video discussing how Drumdrops recorded this album here: youtu.be/BpNqVPaOWSs

To receive 20% off any purchases on this album use the voucher code motown20.

60s Motown DropsMulti-track Drum Tracks
by Drumdrops£ 3.95 for 1 loop pack to £ 89.00 for the Multi-track album
Add A Review
MyKVR