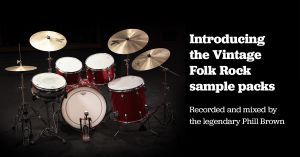 Drumdrops has released the Vintage Folk Rock Kit mixed by Phill Brown in five different packs. The All Samples Pack, the Drum Replacement Pack, the new Multi-Sample Pack, the Single Hits Pack and the One Shot Sample Pack.

The One Shot Sample Pack (£ 5.00) is the most basic pack starting and includes one velocity sample of each articulation. This is intended to be a great way of checking out the kit or for customers who only need one velocity. The samples come as 16-bit and 24-bit WAVs.

The new Multi-Samples Pack (£ 20.00) has replaced the multi-velocity pack. It contains 24 velocities of each articulation. The samples are a mix of the two close mics and the three kit mics. We have also included three round robin variations which can be utilised by the EXS24, Kontakt 5, TX16Wx (courtesy of Sulemain Ali) and Battery patches included. Also included are patches for Studio One's Impact, Ableton Drum Racks, Reason Refills, Renoise (courtesy of Jon Halford), iDrum, Maschine and Geist. Finally this pack also includes 1115 MIDI loops in a variety of genres. All the samples come as 24-bit WAVs.

The Single Hits Pack (£ 12.00) is very similar except that it only includes three velocities of each articulation. This is probably more suited for drum machine users. We included nearly all the same patches as the Multi-Samples Pack. Samples come as 24-bit and 16-bit WAVs.

The All Samples Pack (£ 30.00) contains the Multi-Sample pack, the single hits pack, the drum replacement pack and 10365 single mic samples from the forthcoming Kontakt 5 pack. (This pack does not include the Kontakt instrument). The kit used was a vintage 1966 Ludwig Hollywood kit and it was setup and played by specialist Folk drummer Martyn Barker (Rufus Wainwright, Richard Hawley, Katherine Williams)

For the sound Phill Brown (John Martyn, Bob Marley, Rolling Stones, Talk Talk, Led Zeppelin) used his years of accumulated knowledge and went back to the time of the 60s when he was based at Olympic Studios. Phill's idea was to create a 1960s drum sound with a modern twist. Instead of positioning the microphones close to the kit he wanted to capture a natural drum sound and record the 'dead' room at Livingston Studios. He used only five microphones on the kit: one on the kick, the snare, two kit microphones placed around the kit which provide a surprisingly good stereo picture, and a mono overhead. All of the mics were recorded through API mic pre's.

To view a video of Phill Brown and Martyn Barker discussing this kit head here.

To listen to same samples of the kit head here.

For one month only customers can use the voucher code vintagefolk20 at checkout to receive 20% off any of these packs.

The BFD pack and Kontakt 5 packs will be following soon.