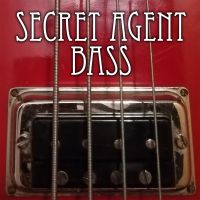 Karoryfer Samples has released Secret Agent Bass, a detailed sample library of a hollowbody bass guitar made in Poland in 1972. The sampled instrument was made in the same factory during the same year as the Secret Agent Guitar released by Karoryfer in 2018. Both instruments run in the free Plogue Sforzando sampler.