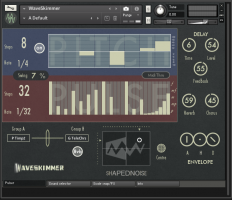 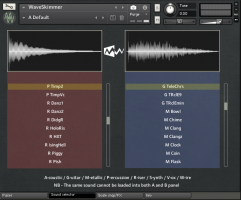 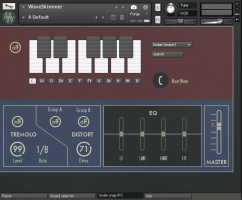 MODWHEEL, in association with ShapedNoise, has announced the release of WaveSkimmer - a pulse machine for Kontakt. It is available at the special price of US$49 until the end of February (Reg. $69).

WaveSkimmer had its genesis in a patch designed by Kirke Godfrey of ShapedNoise for MODWHEEL's Timphonia Library. The idea being to create a pulse machine that can be played dynamically and expressively in real time.

"In our other life as composers for film and TV we will often make use of some sort of arpeggiator, which is pretty standard stuff, but without some very detailed editing it can end up sounding a bit static and uninteresting, " says Steve Roche, "so WaveSkimmer is our response to that. Very often time is of the essence so we felt that a Pulse Machine that had a way of playing dynamics and tonal shifts on the fly would be rather useful. Our friend Kirke Godfrey from ShapedNoise had come up with a patch for our Timphonia library which lead to the development of WaveSkimmer."

Kirke says "The decay of Timpani drums have a really lovely rich tone that works really well when sampled and used as a keyboard sound, but the attack portion of the sound is pretty 'Noisy' and harsh so I wanted a way to control when that part of the sample was heard, and when the sound was just the more rounded and smooth tail of the sound. Obviously there are a number of ways to go about it, but I wanted a way to control and react emotionally to a film score's scene directly rather than pre program in various patterns of tonal shifts.

Previously I would perhaps try opening a filter on a synthesiser when building intensity up to a scene cut or 'hit point' in a film score, or maybe a chorus in a purely musical production. Since sample based instruments, while being harmonically more complex and interesting can be a lot less dynamically flexible, I'd end up using a lot of synthetics. Also I'm personally pretty partial to using arpeggiators and step generators to give movement and dynamics to held chords in my musical work, so some way of combining these two levels of control to sample based sounds seemed to be a good plan."

WaveSkimmer achieves this by using a more 'granular' approach to sample playback.

A simple explanation of the internal architecture is that each sample contains widely ranging harmonic content with musically useful control provided by the simple movement of the mod wheel. Held notes are pulsed according to a pattern that can be pre-set by the user with the addition of a polyphonic arpeggiator controlling the notes as well. The combinations of rates and lengths of the two tables gives an endless variation of musically useful patterns.

Each of the samples in WaveSkimmer has a variety of timbral and dynamic intensity across the range of the mod wheel, and this is really the most musically useful aspect of WaveSkimmer.

WaveSkimmer requires a full version of Kontakt 5.6.6 or above. It won't work with the free Kontakt Player.

WaveSkimmerPulse Engine
by MODWHEEL$69
Add A Review My KVR