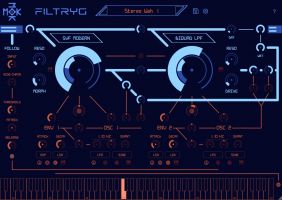 MOK has released Filtryg, a dual filter effect with sound sculpting features to aid in mixing, or add new dimensions in rhythm and timbre to recorded tracks.

Taiho Yamada, co‐founder and EVP of Product at MOK says:

The integrated envelope follower, wide range LFOs, and MIDI keyboard tracking, each react to your playing as well as your source audio, forming an inspired filter effect that becomes a part of your performance.

Artists and producers are constantly looking for new effects to drive their creativity. With Filtryg, we wanted to provide a world-class filter effect that could be anything from a precise mixing tool, to an imaginative sonic companion for your instruments. Thanks to our synthesis-proven filter DSP technology, Filtryg produces metamorphic tracks that will impress even the most innovative musician. We can't wait to hear what people do with it.

The Filtryg dual filter effect plugin offers three filter types with a 12 dB State Variable Filter running in series or parallel with a choice of either 24 dB Ladder, or multiple modes of Biquad, each with their own character. The State Variable Filter is continuously morph-able from Lowpass to Highpass filter modes, with either Bandpass or Notch in-between, while the Ladder and Biquad have a Drive control for extra punch and crunch on the output.

Filtryg provides a one-page, knob-based user interface. The audio path, modulation routes, and their respective controls are all plainly visible and understandable, enabling intuitive and speedy effect construction. It is possible to set up audio-rate filter FM, including assignable keyboard tracking, in just a few seconds. Finally, all of Filtryg's parameters are available to automate from the plugin host.

Find Filtryg in the KVR Marketplace