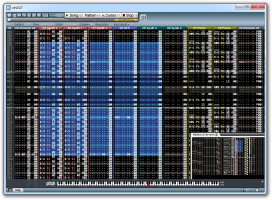 nashNET has released reViSiT 1.7 (actually v1.7.3), in both Standard and Professional editions. This major update notably adds the option to run reViSiT as a standalone program, enabled by the development of a dedicated VST host, designed specifically for hosting the reViSiT plugin, based on a single-windowed environment. To accommodate this new mode, a new installer has been developed, which should also be able to better detect your VST plugin directory.

In standalone mode, tempo is controlled from reViSiT using the new Set Tempo effect (@xx), where xx is tempo in BPM (hex); and which must be used on the base layer. Note: tempo effects are now imported from tracker modules, but may not yield the same speed, as older trackers use tick-based timing (based on tick resolution and "tempo"), whereas reViSiT is row-based (based on tempo only).

A new improved MIDI import now faithfully imports tempo changes in MIDI files. In addition to a fix for the row-alignment bug in 1.6 and overall neater conversions, new editing functions have been added to help you align phrases to pattern boundaries: Insert/Delete Rows in Song. Use the mouse to select the rows in which to insert space (or to remove) by left-clicking the row numbers on the left of the UI, then right click the numbers and select the appropriate function, which will move all the subsequent rows in the entire song forward or backward across pattern boundaries (as defined by the order list).

On the plugin side, another innovation is Host Playback Control, which allows you to trigger both host and reViSiT playback without leaving reViSiT. This is achieved by reViSiT pretending to be an external MIDI remote control. It requires the use of a MIDI loopback driver (like the free LoopBe1), and a host that can be set to slave to MIDI Machine Control (MMC) or MIDI Timecode (MTC). In Preferences (F12), use the new MIDI Sync Output setting to choose your MIDI loopback device and MIDI Sync Type accordingly, then set the host up to slave to that device using MMC or MTC. MMC allows reViSiT to send Start, Stop and Position data to the host, whereas MTC sets reViSiT up as the actual clock source. Furthermore, if you enable Pattern Follow (Ctrl-F) in reViSiT, MMC will move the Song Position Cursor in your host accordingly, even when the music isn't playing. This can be useful for keeping track of how your patterns line up with sequencer tracks. See here for details of how to use this new feature.

See the change log below for other modifications, which also include a number of internal changes in preparation for porting reViSiT to other platforms - notably OS X, iOS and Android.