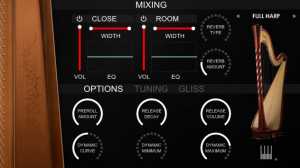 Angelic Harp was developed in collaboration with Guy Randle of Rosewood Recording Company, who engineered and oversaw the sampling session. Angelic Harp consists of a 47-string concert harp, played by harpist Alex Bigney from the Celtic group Kirkmount.

Each string on the harp is individually modeled, mimicking the monophonic nature of each string. This allows a user to soften loud plucks with subsequent soft plucks. It also prevents the unnatural, excessive tonal build-up that many synthesized harps exhibit when playing glissandos and repeated notes. The adjustable pre-roll samples are designed to capture the subtle fingernail noises that occur before the main pluck sound of the strings, providing additional depth and realism to the harp's tone.