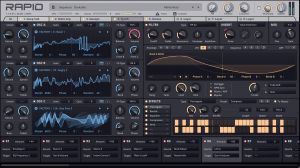 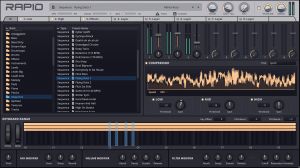 A New Look
The added main theme improves the overall visual style and is intended to be easier on the eyes than previous iterations. On the basis of user requests, the fonts and colors were reworked into a modern darker style. Ideally suited for longer sound design sessions.

The drift insert adds a randomized organic behavior to each unison voice, ideal for analog emulation and vintage patches. It's comparable to the heat dependent properties of analog component and adds small inaccuracies to add unique characteristics.

Filter Wizardry
There are three new lowpass filters. The designs of these filters are based on analog architectures and implement a more intricate feedback drive and resonance behavior:

Rapid FX
It's now possible to use Rapid as effect plugin. The "Effect" version is an additional plugin and will be installed alongside the normal Rapid Synthesizer plugin and also includes a basic set of 93 effect presets. They can easily add very complex motion to mixer, insert or send channels and are ideally suited for build ups, drops and other track highlights.

RAPID SynthesizerSynth
by Parawave Audio    179.99€
Add A Review My KVR