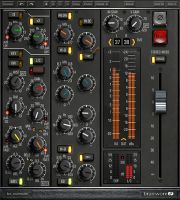 bx_console ($299 MSRP) features Brainworx's new patent-pending Tolerance Modeling Technology (TMT) - bx_console is the first Brainworx product that not only models the components in a circuit, but also models individual component tolerance differences, which cause the unit-to-unit differences between analog equipment of the same make and model.

TMT provides bx_console with 72 different channels, which effectively emulate the nuanced sonic differences of the original desk. The plugin also has a comprehensive dynamics section, including a compressor/limiter and expander/gate, four-band EQ, as well as high-pass and low-pass filters. The emulation even features several Brainworx "mods" to the original Neve design, including a Noise control that lets you mimic the noise of the original console, dial out the noise entirely or even add more noise to capture a certain vibe.

One of the highlights is the Analog Stereo Mode, which enables the user to use two slightly different modules for Left and Right channels, introducing the realistic imperfections of a large-format mixing desk in your DAW.

TMT emulates the component tolerances of an individual piece of analog gear. Other plugins have offered some type of analog variation, but Brainworx say that bx_console is the first product to model all of the components in a circuit. To emulate this circuitry, Brainworx cataloged the tolerances of over 150 individual components, along with all the variations within their realistic specs, as provided by the component manufacturers. So while bx_console faithfully recreates the legendary rock 'n' roll Neve signal path, it also delivers the character of Ulrich's individual Neve VXS, a console that served at Skywalker Sound in California and Bohus Sound in Sweden (formerly run by an ABBA member) before finding its way to Brainworx Germany.

"Ever since I worked on a Neve console for the first time, I wanted one," said Ulrich "For me—like for most producers—it was the sound I had always been after. I bought the console for two reasons: to enjoy its sonics while working on it, and to capture its sound in its entirety to design the closest-to-real-life plugin emulation out there. Having recorded and mixed on this console for years, I know it inside and out, and I am extremely proud of the result our team has delivered after the biggest Brainworx development effort ever."

bx_console has an MSRP of $299 and is available for Mac OS X and Windows in VST, VST3, AU and AAX plugin formats.

All Plugin Alliance products are available as fully functional 14-day demos from Plugin-Alliance.com.