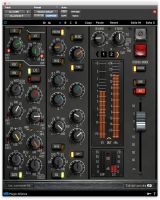 bx_console N takes the concept several stages further, featuring a new THD (Total Harmonic Distortion) knob that adds saturation to the signal, simulating levels of pleasing distortion found when overdriving a real-world analog console in addition to bringing definition to sounds. The Random Channel function randomly assigns a TMT channel to either one instance or all instances of bx_console N in a session, so users can easily introduce analog nonlinearities from channel variation into their mix — just like when working with a real-world analog console.

Brainworx Founder/CEO Dirk Ulrich says "When we modeled the console, we found out that there are about 150 components in the schematics for where the parts have tolerances, and we were able to capture these tolerances in a realistic way, so you get 72 different channels in the plugin. There are some channel strip emulations out there already, but they never captured the most important thing, which is when you mix on a real console, every channel sounds a little bit different. That's very important when you mix stereo channels, because the left and right play-out of the two channels is never exactly the same, giving you some phasing issues — in a positive way. This, I believe, is what people mean when they say, 'An analog mix sounds bigger and wider.' This is exactly what we've captured in this plugin."