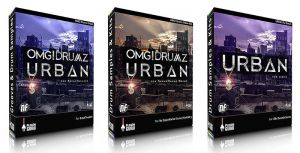 Each plug-in provides unique abilities that the other plug-ins can not provide:

OMG! Drums URBAN for BreakTweaker dishes up the 45 Grooves with 10 patterns per groove for dynamic musical applications. Play different notes on the keyboard and you can switch from the main groove to a fill to a no snare version all while enjoying some crazy intricate programming in a way only BreakTweaker can provide.

OMG! Drums add on drum kits for SuperMacho Drumz / Kontakt 5 gives you the same 45 kits except that they are mapped with an additional 56 drum samples above and below them that provide toms, cymbals, percussion and lots of cool additional drum sounds to create far more complex patterns sonically than what the BreakTweaker version can produce.

All 45 kits have the same "additional" 56 drum samples so if you try out a different kit, the additional programming you might have done stays sonically the same. There is also a built in Groove player that can play back the included 81 MIDI File drum grooves that closely correlate with the BreakTweaker grooves. Furthermore, a bonus 200+ MIDI File grooves will be released on June 10th that give this drum library grooves in other genres as well as more urban grooves to play with.

This library requires that you own the full version of Kontakt 5.6 or later plus PlugInGuru's SuperMacho Drumz library.

Both the BreakTweaker and the SuperMacho Drumz libraries utilize the same 156 new samples that were custom created for these grooves.

URBAN for Serum is a 128 patch URBAN sound library which contains the Sub Kicks, Booms, Basses, Pluck, SFX, Synth and many other sounds that were created for the Drum Groove libraries - only now you can play them across the keyboard easily. Many of the sounds found in the groove libraries (FX, Boom kick and even electric piano) were programmed in Serum and then sampled to be used in the final drum grooves - so calling up these patches in Serum is calling up a synth created preset, not a sample. Add to this a bunch of samples from PlugInGuru's MegaMagic: Guitar, MegaMagic: Cello and MegaMagic: Viola sample libraries and the value of this library is even greater.

Find BreakTweaker in the KVR Marketplace

1 filter enough (as in Serum)?by gentleclockdivider @ 9:07 in Instruments

inSIDious is coming... a legendary sound chip will be reborn!by gentleclockdivider @ 9:05 in Instruments