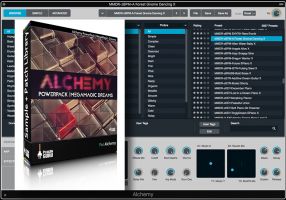 PlugInGuru.com has released a library for the Alchemy version that is included inside of Logic Pro X (not compatible with any other version of Alchemy).

This PowerPack adds 165 Patches, 370 Source files (for fast loading of sample or additive maps without needing to import audio), 32 Effect presets with long detailed names and a 1 hour 3-part PowerVideo that provides tons of tips and tricks on getting the most out of this flagship synthesizer.

The Patches include all 105 12-second samples from MegaMagic: Dreams. A library where a single sample is playable across the entire keyboard range thanks to the processing and 3 different reverbs that are recorded into the samples. Also included are over 30 of John Lehmkuhl's original Camel Audio Alchemy patches (available for the first time). The majority of these patches were part of the factory voicing of the original Camel Audio Alchemy. The first patch in Camel Audio's Alchemy "A Forest Gnome Dancing" along with many other customer favorites are making their first appearance in Logic Pro X with this library. Also included are over 20 of new patches combining samples from MegaMagic: Dreams with samples and the VA synthesizer found inside of Alchemy.

PlugInGuru say "Before this PowerPack, you had to use the "Import Audio" command to load any samples into Alchemy. Even with the original plug-in, this ability was never explored... There is a "Load Source" and "Save Source" command that can be used to access a previously empty folder named "Source". NOT ANY LONGER. With this PowerPack there are 3 folders you can add to the Source folder that give you over 370 presets that will load full sample maps without the tedious process of importing audio. You can call up an existing pad, navigate to a piano or string orchestra map and quickly load it to make a new patch in seconds that used to take much longer and required a LOT more steps and know-how to accomplish. This basically gives you a "sample list" like most workstations have to choose what samples you want in your patch. Still scratching my head as to why this was never supported."

The Effect Presets are set up to let you load up to 8 effects in a single preset and the name tells you exactly what effects in what order they will appear. Categorization in the name also helps you know if a preset is designed for leads, basses, pads or synths. Very handy and far more useful than the simple named basic presets Alchemy includes.

The 1 hour 3-part PowerVideo (also available separately for Mac/PC owners of the original Camel Audio Alchemy) covers The Interface (Pt1), The Oscillator(Pt2) and "Patch from Scratch" (Pt3). After watching these you will have a far better idea of how to maximize and deepen your love relationship with Alchemy. There is so much to explore and this series is designed to start you on the path to a deeper and more meaningful relationship with Alchemy.

This PowerPack is available for $29 until December 5th. It then will be at its retail price of $39.