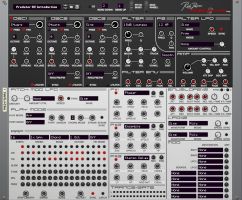 Rob Papen has announced that Predator-RE, the Reason version of Predator, has been released.

Predator-RE is a synthesizer that "combines inspiring preset's and first-class features to make this your 'go-to' synthesizer for contemporary music production". The user interface has been designed so that all controls are visible on screen, making it easy-to-use.

Predator-RE is packed with powerful features such as oscillators which also can modulate each other, two filters which can be combined in a "very wicked" way and offers 27 different filter types including comb and vocal-filter, 3 top quality fx units with 25 fx types, Unison Detune, Chord Memory and a versatile Arpeggiator.

Predator-RE also offers inputs into the filter, 3 fx units and vocoder, and access to Reason's unique CV and GATE features are also available at the back panel.

And last but not least, Predator-RE's arpeggiator has outputs, so can be used to control other Reason plug-ins.

Included are almost 4000 presets divided into several style banks - there is no contemporary music style that is not covered by the sound of Predator-RE.

Find Predator 2 in the KVR Marketplace