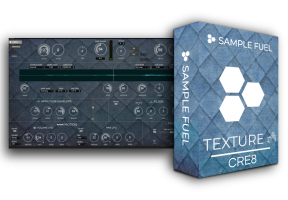 Sample Fuel has released the Production Bundle and Texture-CRE8 for HALion Sonic SE.

The Production Bundle features all of Sample Fuel's full version products for a discounted price of $299.99. The bundle comes with over 130 multis combining presets from all the libraries making composing more streamlined and simpler. The bundle also includes a new product, Texture-CRE8, that is only available in the bundle.

Texture-CRE8 is powered by the Grain-CRE8 and is a granular engine that transforms more than 60 sample sources into unique pads and textures. This instrument creates detailed textural colors and movement adding dimension and character to your compositions. Texture-CRE8 works in stand-alone mode as well as all plugin formats across Mac and PC via the free Steinberg Halion Sonic SE Player. It is powered by Sample Fuel's CRE8 Engine that aims to be simple, intuitive, yet powerful and capable.

Texture-CRE8 is a specialty instrument library that focuses on creating unique textural colors and movements. The patches are interesting but simple enough to let you compose with them rather than being restrictive to the point where you have to compose around them. Many of the presets live up to the name Texture-CRE8 and have complex motion to create interesting textures and moods.

Find HALion and HALion Sonic in the KVR Marketplace