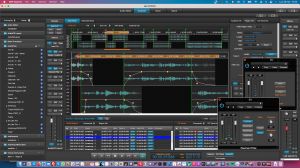 This new version 5.6.1 is a Universal Application, it runs natively on Macs based on both Apple Silicon M1 and Intel processors.

NOTE: if you run DSP-Quattro on a Mac based on Apple Silicon CPU, to be able to host plug-ins compiled only for Intel Mac, which run on Rosetta2 of MacOS BigSur, you need to force DSP-Quattro v5.6 to run on Rosetta2. To do it, do cmd+I on the application icon and set the flag to start it on Rosetta2.