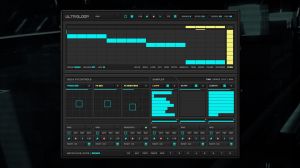 At the core of Ultraloop is a loop layering engine and sequencer, capable of both layering and comping - a production technique that allows a user to flip between layered tracks that are playing back simultaneously by muting and un-muting slices of each layer. Up to eight tracks with loops of any BPM can be layered or comped together in real-time and can be further processed using the all-new Gestural FX engine. The Gestural FX engine automatically generates dynamic effect movements that ramp and modulate over time, using a suite of creative effects designed to produce endless fills, articulations and variations.

To create additional loops and variations, Ultraloop features randomization functions, connected to a unique Preset Grid system for each main parameter group. A Preset Grid allows the user to store, recall and automate settings by using a dynamic memory grid made up of 17 slots that can be played on-the-fly. The settings for the entire instrument, including all the parameter Preset Grids can be stored and recalled in one of eight Global Scenes, allowing a user to create loop variations. All the relevant instrument features can be played with live, without skipping a beat, by using a mouse, MIDI or OSC.

Ultraloop comes bundled with additional content, including an iPad Lemur template by Antonio Blanca and a factory loop library by artists from Enig'matik, Loopmasters and Sounds of Revolution. A series of Ultraloop Expansion Packs are available separately and feature loops and presets by artists such as Si Begg, Dusty Fungus and Chris Carter.

Price: $69. Additional Expansion Loop Packs can be purchased for $19/each.

FEATURED
50% Off
AX73Synth (Analogue / Subtractive)
by Martinic  $59.50
Add A Review My KVR
Was $119.00; Save $59.50 until 31 Oct 2021
$59.50Buy
BUYING!XCheckout
The Orchestra Essentials
Orchestra
by Best ServiceMercury-4 Polyphonic Synthesizer
Software Synthesizer
by Cherry Audio
Featured
An Introduction to Paragon ST