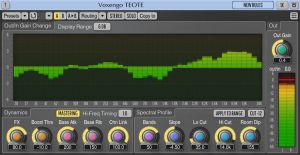 Voxengo has announced the release of Teote, an automatic spectral balancer plugin available in AAX, AudioUnit, VST, and VST3 plugin formats, for macOS and Windows computers.

While by definition Teote is a dynamic equalizer, its technology is solely based on multi-band dynamics processing. This allows Teote to have only minor phase issues, and to produce a subtle transient-emphasis effect associated with dynamics processing. Teote tries to make the program material follow the specified spectral profile, tuned to the contemporary mastering standards by default. It can be said that Teote "straightens" the frequency response, making further adjustments a lot easier; it removes a lot of repeating work.

Is Teote an AI plug-in? In a sense that AI usually boils down to a "curve-fitting task", Teote is an AI plug-in that performs gain adjustment decisions in a quantity equal to "SampleRate multiplied by BandCount" per second. However, Teote does not use neural networks; it is based on an extremely-refined, completely predictable, curve-fitting function.

Teote is an acronym for "That's Easier On The Ear".

Teote is free for Voxengo Premium Membership owners. A demo version can be downloaded freely at the Voxengo web site.

Find Teote in the KVR Marketplace