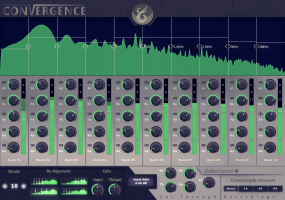 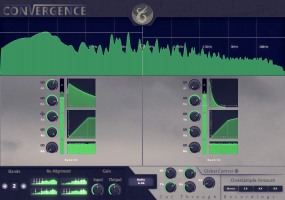 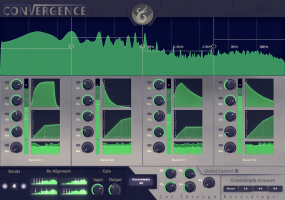 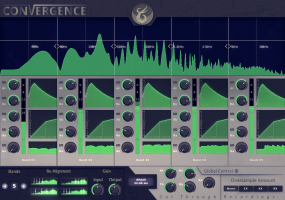 Introducing the ultimate mastering tool. This versatile mastering compressor can handle even the most dynamic of tracks. Convergence features up to 10 bands of compression and as low as 2 bands. Does your track only need a 4 band compressor? No problem! It is trivial to add or remove bands and to adjust the crossover frequencies for them.

Convergence uses crossover filters with -6dB gain at the crossover frequency that sum together to create a perfectly flat frequency response. These -6dB crossovers also introduce the least amount of phase shift possible while still being low on CPU usage. The compressors are designed to have a digital feel to their attack and release timing to be as precise as possible.

Convergence comes with several displays that are fine tuned to help you visualize what effect your tweaks have on the incoming audio. The main display is a spectral analyzer with controls to adjust the crossovers for each band. This allows you to easily dial in the frequencies based on which frequencies are most prominent. Each band also has an envelope display, a compression display, and a gain reduction display. The envelope display helps give you an idea of how attack and release times will affect the compression. The compressor display shows how the threshold and ratio controls will affect the compression as well by graphing input versus output levels. Finally the gain reduction display shows input levels and output levels over time so that you can easily see transients and how they are being affected by the compressor.

This plug-in is also available as a free version which works exactly the same as the full version except that it is limited to 2-4 bands rather than the 2-10 that the full version boasts. The other limitations of the free version are that oversample only available up to 2x and the compression display is disabled. Try it out now to see the power of this compressor for yourself.