Login / Register
My KVR0Updates
00 items | $0.00 CHECKOUT New
Plug-in Developer?
Search
Who are we in the KVR community in 2020?VOTE NOW
TB ReelBus v4by

TB ReelBus v4 by ToneBoosters is a Virtual Effect Audio Plugin and a Mobile Audio App. It functions as a VST Plugin, an Audio Units Plugin, a VST 3 Plugin and an AAX Plugin. 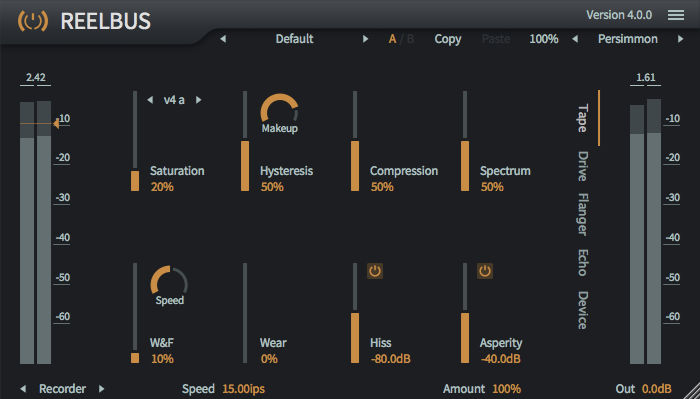 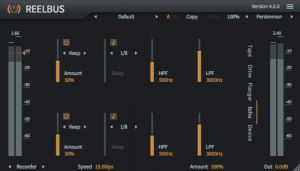 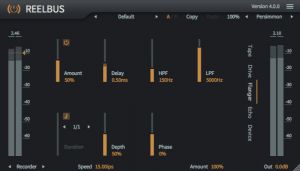 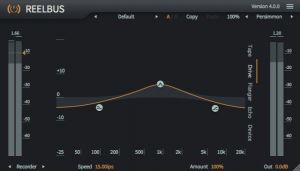 As with most recent ToneBoosters plugins, ReelBus 4 has a scalable and themeable user interface, supports any sampling rate up to 384 kHz, can process immersive audio formats such as Ambisonics and Dolby Atmos (up to 16 channels; VST3 and AU only), features zipper-free automation and has virtually infinite internal headroom.

Here are the tape emulators currently in my plugins folder:

And that's not including stuff like RC-20 Retro Color (XLN) that can do some tape stuff, and the tape plugin that comes with Ozone. (Noticeably absent, here, is Slate Digital's Virtual Tape Machines. I've tried it; it's great. Just haven't pulled the trigger on it).

These all have different sounds and different levels of tweakability. Some are more-or-less "set it and forget it" (Softube Tape), some are painstaking recreations of particular tape machines (the Studer and Ampex from UAD are the pinnacle of that category), and some are more like "tape toolkits" for getting tape effects more generally (Satin is the probably the deepest tool if you want to go that way).

Reelbus 4 is solidly in that "toolkit" category, and so probably bears the closest relationship to Satin.

But honestly, as awesome as Satin is (and it really is), Reelbus is damn close. And it's noticeably easier to use. There's very little skeuomorphism in the interface; it's basically a set of sliders that let you play around with various elements of the "tape sound" (including such arcana as hysteresis and asperity). And it sounds great. The presets, while not extensive, are really good at hitting the fundamental tape sound categories, so you can just use it straight.

If you already own something more in the "set-it-and-forget-it" category (whether it's a straight emulation or not), and would like to go deeper into the weeds of what tape machines can do, this is absolutely your best bet. It's super cheap, but incredibly deep and sophisticated. And it might be the best way to learn how to tweak the tape sound, because the interface is so clear. You can really go bonkers with it. and that's a good thing to do when you're trying to learn how to play around with tape. Once you get your head around this, you'll have a much easier time popping the lid on, say, the Ampex from UAD or the service panel in Satin.

And even though I own tape plugins that cost nearly six times as much (man, those UAD plugs hurt), Reelbus 4 is perilously close in sound quality to some of those fancier plugs. If you're into tape -- or thing you might like to be -- this is really a must buy.

Noticeably missing: Sknote Roundtone 4. It's the newest version (just came out a few months ago) and you ought to add it to your arsenal :).

Wow! I knew about that plug, but had been ignoring it because there hadn't seemed to be any activity on it since maybe 2012 (not that there aren't some fantastic plugs that haven't been updated in a while). Not sure how I missed version 4.

Thanks for the head's up. It is my goal to own absolutely every tape emulator in existence;).

To me Reelbus 4 is so good and inexpensive that I simply feel no need to investigate or invest in other tape sims. 8).

You know, I tend to embrace this entirely reasonable, clear-headed approach when it comes to most things (how many EQs does one actually need?). But when it comes it tape emulators, I lose all semblance of rationality.;).

I have TB Reelbus 4 permanantly bolted to my Master Bus :) Sometimes I will put the Softube Saturation Knob before it (but not too much because it can bite) and then after Reelbus 4, there is always TB Barricade 4 (with only the limiter engaged) followed by SPAN and Klanghelm's VU Meters...Reelbus 4 really adds "something" to the overall mix...One of the the cool things about the v4 TB plugins, is that Jeroen has brought the latency down with a zero latency option in Equalizer 4...The TB plugins are very well coded and extremely underated...

The other night I played around with Waves J37, U-he Satin & Airwindows ToTape.

ToTape was actually my favorite.....with a more 'recognizable' tape feel, if that makes sense.. I was shocked.

Not to say anything bad of the others, but with so many options in them, I kept experimenting like they were eq's (& never sounded as pleasing as ToTape IMO). It was like throw it on, turn it up, bam.....there's that hitting-the-tape sound rounding off everything nicely with a thick (non-cheesy) character.

i was in Ableton & assigned a rack of Macro knobs for it for future use (since it's so bare bones, it has no actual GUI).