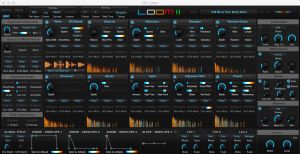 Air Music Technology has announced the release of Loom II, the follow-up to the modular additive synthesizer Loom. It is available at an introductory price of $99.99 (list $149.99) until the 30th of November. An upgrade is also available at $49.99 for all those who already own Loom I (Contact softwaresales@airmusictech.com to get your coupon).

Loom II takes a unique modular approach to additive synthesis, a synthesis technique that involves combining simple waveforms together to create complex sounds, by enabling anyone to select from and combine 34 editable modules. Create anything from wobbles, organs, ethereal pads, ambient soundscapes and so much more. The programmable Morph Pad brings your Loom II patches to life by morphing between user-defined variations of your patch, adding motion and momentum that continuously evolve.

Loom II delivers up to 512 harmonic partials per patch and uses an intuitive modular design to create complex sounds quickly and easily. Each of the 34 editable modules performs a specific sonic task—Octaver, Second Tone, Moving Filter, Noise, Linear Lowpass, Modulator, etc. The Loom II framework provides a series of cells, where up to 10 of these modules can interact combine to generate an additive synthesis patch. Each module includes task-specific parameters for detailed, individual control of the patch. For real-time visual feedback of your sound, each module includes a spectrum window, offering a visual indication of how that module is affecting the individual harmonics of the sound.

Loom II's Morph Pad is a powerful tool that adds dynamics and movement to your patches. Using a condensed set of control knobs, Loom II enables you to quickly create up to four variations of your sound, and assign each one to different quadrant of the Morph Pad. Point, click, and drag anywhere on the Morph Pad to create a morph path. As the sound moves along this patch, you will hear it morph in real time between your four variations. This morphing can be free-form, or set to sync up to a particular musical unit—1 bar, 4 bars, etc. Plus, each segment of the morph path can be synced individually. In Loom II, AIR have expanded the morph pad by allowing Points/Paths to be stored and restored separately. They have also added a new X-Axis mode enabling it to perform like an envelope, which is ideal for rhythmical morph patterns. For this new mode Snap/Grid is also available. Additionally, for expanded creativity you can now use parameters not linked to the Morph.

Loom II comes packed with sounds. Sound designers Richard Devine and Mark Ovenden have created 850+ tweakable patches that include wobbles, pads, bass, soundscapes, and more. 500 all-new presets for LOOM II and 350 re-mastered presets from LOOM I. You can tweak, analyze, and customize their sounds to make them your own, or dig deep and begin creating your own additive sounds from scratch. For sonic inspiration, Loom II's Smart Sound Randomizer instantly generates new parameters—or a new mix of modules—to jump-start your sound design sessions. All parameters can be mapped for MIDI control. Additional preset packs are available free of charge and for purchase from 3rd-party partners to provide additional creativity.

On-board effects add extra expression to your customized additive sound creations. Using the drive or distortion on an additive sound can produce an aggressive edge or introduce rich harmonic changes. Modulation effects include a chorus and a phaser. Each adds depth and motion to your sound. Loom II also includes a reverb effect to help your sound sit in the mix, or to create an expansive audio environment.

Loom II is distributed by Plugivery and is available at www.airmusictech.com/product/loom-ii and at pro audio dealers worldwide.

Find Loom Classic and Loom II in the KVR Marketplace