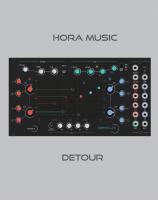 Hora Music has announced that Detour, a new Vector Phaseshaping Synthesizer for VCV Rack, part of the Hora-VCO_VCF_VCA plugin, will be released at the end of the week. The synth offers an advanced model of the Vector Phaseshaping Synthesis and CV inputs for every parameter. The vision that has guided Detour's development is based on research as part of a hardware digital synth project.

This model has been selected for the wide sound variety it can produce compared to the needed CPU load.

The vision of this is also influenced by 80s phase distortion synthesizers and the sound can be very close to the classic Casio CZ series.

The specific sound of Detour is due to the model that can cover the classical PDS setting (and more), to the filter and to the internal envelope generator.

The ADSR is a bit different from those usually developed for eurorack/VCV modules and the VPS model is exploited in a specific way which offer to set two inflection points.

You can refer to this paper from the IRCAM for more technical details about the VPS: ircam.fr/.../55_e.pdf

Detour is part of the Hora-VCO_VCF_VCA plugin, it is available on both free and commercial ($24) version of the plugin, the version includes with the free version is monophonic and the one coming with the commercial plugin offer 16 voices of polyphony.

Omri Cohen offers an exclusive pre-release video about it: YouTube.com/watch?v=D8dYfy9M2dk