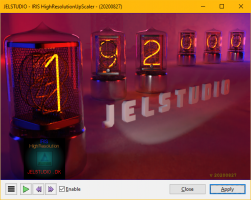 JELStudio has announced the release of Iris, a spectrum-resolution up-scaler for pre- or post-processing use, as a VST2-plugin for Windows.

Essentially, Iris (a word-play on High-Resolution) can convert LoRes music to HiRes.

This plugin may be of interest to the following types of people: