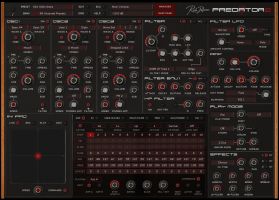 Rob Papen has released Predator 2, featuring new functionality and controls while staying true to the underlying concept of being fun and easy to use. In typical Rob Papen style, there's thousands of presets in a huge variety of styles.

The release of Predator 2 also brings a new version of eXplorer - the complete collection of 15 Rob Papen virtual synths and effects which saves over 50% compared to individual purchases. If you already own one or more Rob Papen titles you can buy eXplorer 4 for even less.

If you bought, or upgraded to, eXplorer 3 between 1st July and 25th November 2016, you can upgrade to eXplorer 4 for free.

What do you guys think of Predator 2.

It is surprisingly enjoyable. I have all major synth vsts, but for some reason Predator is the only one with the right amount of features to get quickly where you want to be without having too many options. Version 2 is a big improvement, as it now does wavetable synthesis, giving a wider Sonic Range.

if i had to learn synthesis again, It would be on this synth.