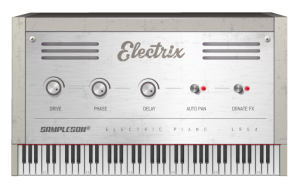 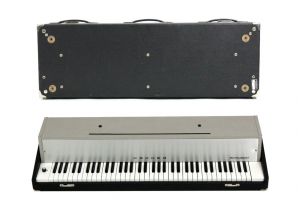 Sampleson has released Electrix, the recreation of the rare and famous Hohner Eletra Piano T used by Led Zeppelin in "Stairway to Heaven", "Misty Mountain Hop", "No Quarter" and "Down by the Seaside".

Hohner created the Electra Piano T in the early '70s and was followed by other electric piano manufacturers. It uses forks struck by hammers and electronically converts vibrations transmitted to a transistorised amplifier.

The sound can be described as a half-way between Rhodes and Wurlitzer, but with a vintage dirty touch.

Electrix is the result of more than 1200 hours of development and testing. Native 64-bit and balanced to fit into any mix. Available for Mac and PC - VSTi, AU and Standalone versions are included.

GumRoad does suck.
Guess who else sucks? Gobbler. I hate Gobbler.

But I love Softube, so it's worth it.

Sampleson Electrix sounds AMAZING! Not to mention, it's FREE!

And unlike Gobbler you don't have to download GumRoad. All you've got to do is make an account. You can even use a spare e-mail address if you're worried about Spam. It's really a pretty simple process.

And, considering how awesome this E-Piano sounds, I think it's totally worth briefly dealing with GumrRoad.

And in case you didn't know, the entire lineup of Sampleson audio is currently free right now. (Two of the three products are in Beta. But it looks like Beta Testers can keep them when they launch.

I write all this because GumRoad should NOT be an obstacle between anyone using such a beautiful sounding software instrument. Seriously, check out the samples above. Especially the Sampleson Electrix Zep. The upper-mids are so crisp. The lower mids were really juicy. The lows: thick, warm and inviting. And the high end... man, the high end is just heavenly. The transients had a nice smack to them and the overall sonic image is wide, yet direct.

I can't wait to use these in my next production! Sampleson did a fine job here!

And for the record: I'm not affiliated with the company in any way. I'm just really impressed with their product.

Sounds nice n dirty.
Thanks for the freebie.
I'll donate none the less, but website popups on plugins is very wack in my opinion, better to just have a menu with the option "go to our website" or something.

Well, I downloaded it for free, and within a minute of pulling it up, I was able to come up with the beginning of a new track--especially once I added a nice phaser and plate reverb.

I'm going back to donate now. Anything that can help create a tune is worth a few bucks, at least.

I wish we could adjust the velocity sensitivity, though. It has quite a range, and it's a bit difficult to control. Other than that, it has a very nice sound.

This is a very very very playable instrument. Really sounds good. Very playable, musical, and inspiring. I LOVE it. Thank you!!.

Hi, thanks for this freebie, .

Have you plans to release Windows versions also for others plugins?