The Volume plug-in collection has been upgraded to version two, with the addition of three included plug-ins. Secondly, they have Integrated DAW Control in Cubase 9.5 for Console 1, which is their most requested feature as of late. On top of that Softube added Preset Collection, a preset manager and organizer for Softube plug-ins. Share your Modular patches with the world, and you don't have to bother about different preset formats. Speaking of Modular, you can now use Spring Reverb in Modular.

Last, but not the least, the Weiss DS1-MK3 compressor/limiter and its little brother Weiss MM-1 have been released.

Since its launch in the 1990s the Weiss DS1 has become popular in mastering studios around the world despite a premium price tag. It is now available as a plug-in, offering more flexibility than ever in a modern DAW environment, at a fraction of the cost. 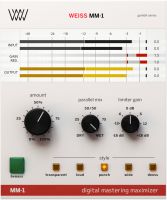 Featuring the same algorithms as the original digital hardware unit, the MM-1 offers five flavours of limiting; Transparent, Loud, Punch, Wide, and De-ess; intelligently progressing as the 'amount' knob turns, and blendable with the mix control, to give you precisely the right amount of power over the feel of your masters.