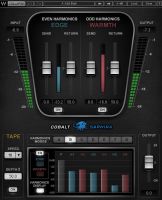 Waves Audio is now shipping the Waves Cobalt Saphira plugin, an advanced harmonics shaping tool that lets you give your mixes analog musicality, depth and "glue" by adding rich harmonics to your tracks and separately shaping the various qualities of the harmonics you are adding.

Cobalt Saphira allows you to inject real depth into your mixes, helping you glue your tracks and turn them into a more musical and cohesive mix. Cobalt Saphira excels on groups and sub-mixes and in mastering situations.

Cobalt Saphira is the first in the new Cobalt line of Waves plugins, which let you give your tracks analog qualities with a new level of surgical digital control.