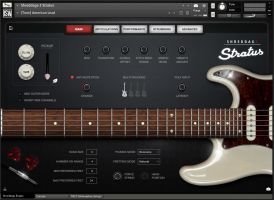 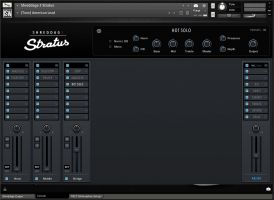 Shreddage 3 Stratus by Impact Soundworks is a Virtual Instrument Audio Plugin and a Standalone Application and Soundware (samples or presets that load into other products) for macOS and Windows. It includes, and is therefore "powered by", Kontakt Player, which functions as a VST Plugin, an Audio Units Plugin, a VST 3 Plugin, an AAX Plugin and a Standalone Application.
The OS and Format icons below are for the latest version of Kontakt Player. The version numbers are for Shreddage 3 Stratus.
Product
Version
1.0
System Requirements
Kontakt Player 5.7 or higher
9GB disk space
6GB RAM
Product
Version
Not Yet Released
Product
Version
Not Yet Released
Tags
Tags:Electric GuitarGuitarImpact SoundworksKontakt InstrumentKVR Readers Choice Awards2019 Nominee2022 NomineeMetalRockShreddage 3 StratusStratocaster
Instrument
Formats
Soundware
For
Native Instruments KontaktNative Instruments Kontakt Player
Soundware
Formats
NKI
Copy Protection
Serial Number
My KVR - Groups, Versions, & More
7 KVR members have added Shreddage 3 Stratus to 3 My KVR groups 7 times.
Not In Your MY KVR Groups
(or group limitation prevents versioning)
5 0 I Own This
1 0 I Want This
1 0 My Actual Studio

Shreddage 3 Stratus is the first instrument in Impact Soundworks' Shreddage 3 series of virtual electric guitar and bass sample libraries for Kontakt Player. Built from scratch using 6 years of experience & user feedback since the release of Shreddage 2, the library features a deeply-sampled six string electric guitar with three pickups and a classic American sound. It is available now for the list price of $149.

Shreddage 3 Stratus includes a new interface, mixer, and performance engine taking advantage of all the tools available in Kontakt 5.7. Compared to the Shreddage 2 series of instruments, Shreddage 3 is capable of a far greater variety of tones and playing styles.

Shreddage 3 Stratus is available now for the total price of $149 ($119 for the guitar, $30 for a Shreddage 3 license). The license need only be purchased once to activate future entries into the Shreddage 3 series.