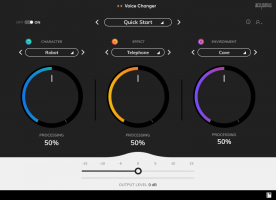 Accusonus has announced the release of Voice Changer, saying:

Voice Changer is our latest tool for democratizing content creation. By bringing a new product to our range of audio repair plugins and royalty-free audio libraries, users now have complete control over their own voice.

These three aspects are combinable, as per user requirements. Accusonus has provided a wide range of presets, which can be used as a starting point. Alternatively, users can create their own voices from scratch, then save them as a custom setting for even faster voice changing.

Voice Changer is available now from the accusonus website as a standalone product, offered on a monthly or annual plan, starting at $4.99 per month.

Subscribers of the Creative and Post-Production Suites will now be able to access the tool, as part of their existing subscription, no extra cost.