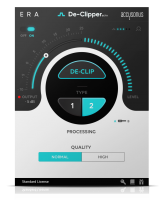 Accusonus has announced the release of the updated collection of multi-patented audio repair plugins, the ERA Bundle 3.

The ERA Bundle offers both fast workflows and high-quality processing and is intended to be the go-to toolkit for both entry-level and professional users who need agile audio repair. This version adds several updates, improvements and bug fixes for all available tools as well as a new breath-control module in the Voice Leveler plugin.

Most importantly, it includes the brand new, fully-automatic ERA De-Clipper. ERA De-Clipper restores saturated audio segments and improves the overall signal quality. You don't have to mess with threshold adjustment anymore, as ERA De-Clipper automatically detects clipped parts and tunes the thresholds for you.

ERA De-Clipper has been extensively tested and Accusonus have developed new, state-of-the art algorithms. However, Accusonus has flagged this as a beta release to get feedback on the new user experience. Take advantage of the early-access price of $39, let them know what you think and shape the future of audio repair.